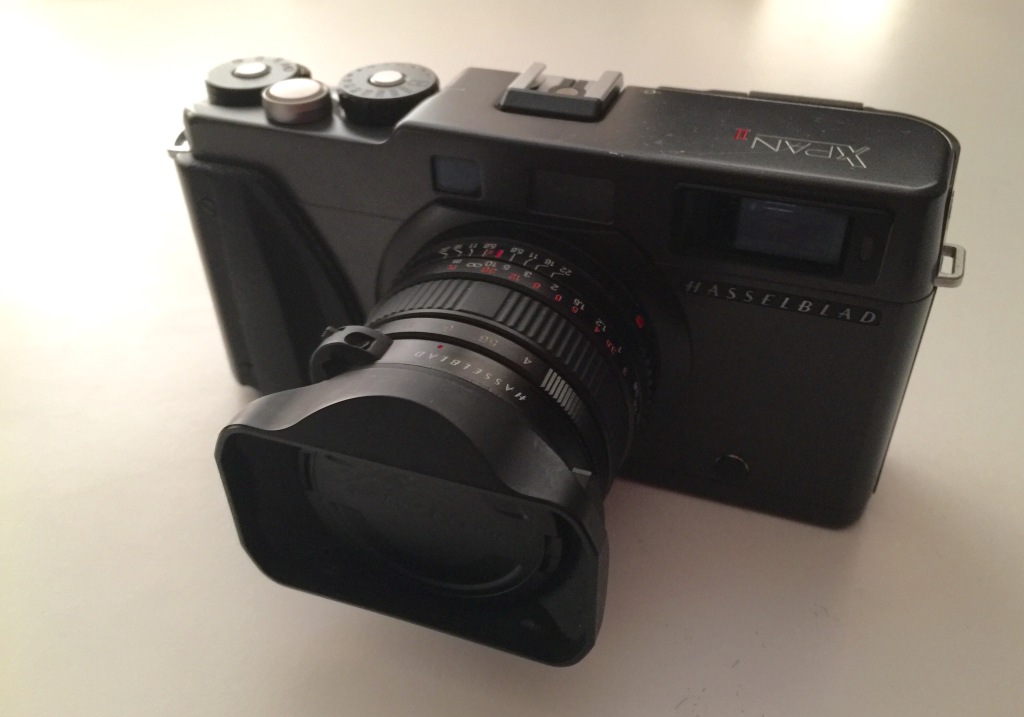 So, now that I’ve been smitten by shooting film, and large format 5×4 in particular, I’ve been looking for something to more properly complement my Technikardan for dedicated landscape trips, and also something to walk around with and shoot when I feel like it (when an iPhone won’t cut it).

I’ve been tempted by panoramic cameras for a while, since I read some time ago of Ben Horne’s successes with a Fuji GX617 alongside his 8×10 setup. Medium format panoramic seems great, and I was sorely tempted a while back by one of these beasts while in a London camera store earlier in the year. But they really are beasts, especially with the lenses and their integral ‘roll-cages’. Nor are they especially portable.

Anyway, I finally bit the bullet on a Hasselblad XPan ii when one came up in very good condition this week, along with a centre filter for the 45/90mm lenses. If I hadn’t been able to find a centre-filter, I’m not sure I would have bothered, since I’m very interested in shooting this not only with B&W but also colour slide film, where the exposure latitude will show drop-off in the corners without the filter (same deal with ultra-wide large format lenses: still haven’t found a centre filter for my 75mm Nikkor SW, so have only used it for B&W so far).

I do have my Canon A-1, and have just picked up a cheap 50mm lens for it. But I feel that the flexibility of the XPan (allowing switching for both 24x65mm and normal 24x35mm shots) makes it a more natural complement for the 5×4, and the lenses should be rather better: I have the 45mm, and will be picking up a 90mm soon, for use with more detailed shots. The 65mm film width allows for more resolution than standard 35mm, while obviously not in the same league as 617 medium format, I only have an A2+ photo printer, so that’s a bit pointless anyway.

I’ll be interested to see how I can use it in the same way that Ben Horne used the 617 – what he called his ‘chaos camera’. While some people think of the panoramic format as gimmicky, it can be a great way of using aspect-ratio to control a complex scene, so long as you get used to composing with what are essentially two 35mm frames side by side. It’s also a great camera for urban and street shots, using zone focusing, and what is allegedly a pretty accurate meter and aperture priority. (I so far haven’t trusted the Canon A-1 and have used it only with my Sekonic, basically removing most of the point of ease of shooting with it, at least with colour film). It’s fully electronic, but seemingly very well built, and has an excellent film transport system that avoids lots of fuss, and also has a mid-roll auto-rewind facility. Only thing missing I feel would be the possibility for exif data to be recorded and downloaded (cf. e.g. the Nikon F6).

The camera isn’t at all cheap (prices for good condition examples are actually comparable with the Fuji 617s); it’s quite heavy for the size; and it’s easily scratched (I have no strap yet, but will likely have to pop to a London Leica shop to find a leather-only strap to avoid any scratching from buckles); but I feel I’ll probably get more use from this than from the A-1, and I’ll carry it in my large format backpack. It fits nicely in my Hadley Pro bag, though a slightly smaller bag might be nice, just to accommodate the body, two lenses, and some film. While I’ve got plenty of Velvia 50 and Delta 100 in 35mm, I may look into some 400- or 800-speed stuff for UK handheld shooting work.