An account of the last couple of days will be broken down into two parts; there’s a slightly comic sting in the tail of part 2 if you get that far!

On Sunday morning, 1st June, I set out early from home on a quest to pick up some UK butterflies I’d so far missed or not seen, with the aim of getting some more good images. The aim was to head past Oxford with the option of visiting all or some of three sites: Lardon Chase, Hartslock, and Seven Barrows. In the end I skipped the last, and went to both the first two (situated as they are relatively close together on either bank of the Thames at Goring and Streatley).

The day was a reasonable success photography-wise, and excellent sightings-wise. Lardon Chase is famed for its colonies of Small Blue and, in particular, Adonis Blue. I arrived on site at about 7am – which was in retrospect far too early! It’s interesting that some butterfly species, including the woodland fritillaries I went for last week, perch up nicely for overnight roosts and are relatively easy to locate early in the morning. Not so with today’s target-species, I discovered! The weather on leaving home had been bright and sunny, but on arrival there was a blanket of fog on the lower slopes, and I saw virtually no butterflies that were worth photographing in the dingy conditions – though I did in fact see one Small Blue, two male Common Blues, and what turned out to be one female Adonis Blue.

My trousers wet with the heavy dew, I headed back to the car and crossed over to Hartslock, on the lookout for Green Hairstreak if possible and also to have a look at the Orchids which I had so far not visited this year. Most of the species the site is famous for were slightly past their best, but I did manage to find a couple of fresh-looking Bee Orchids, and a patch of White Helleborine, a species new to me despite the fact that I’d walked past this exact area on all my previous visits – perhaps the earlier season this year has something to do with that. But sadly no butterflies to report from here!

So, back to the car once more, and back to Lardon Chase, now that the fog had lifted and temperatures were heading upwards also. I walked the same route as before, this time between about 9 and 10am; on this occasion, I saw at least 6 Common Blues, 2 quite worn female Adonis Blues, 1 very fresh Meadow Brown, and a Large White, together with a Common Blue Damselfly which I also managed to photograph. Still no sightings of the dazzling male Adonis Blues, however.

Back to the car…  The carpark was now full, and it transpired that a local branch Butterfly Conservation walk was taking place at 10:30, intending to search for the Adonis Blue. Totally coincidental to my presence, and very strangely given that I had visited the Branch website the night before and failed to take in the details about the walk. Never mind, anyhow, I decided to join in. A very good decision, since temperatures had warmed up considerably, and lots of eyes on the job meant that a few males were duly located, though not in great quantities; also a few more Small Blues (none sadly particularly photogenic) and one Green Hairstreak (which also refused to pose for its photograph).

Joining the group was a good idea also because of information shared as well as some nice company. I managed to get some info on a site new to me – the subject of Part Two; a kind chap even gave me an OS map printout in addition to detailed – and accurate directions!

More to follow on that front; meanwhile, some representative shots for Part 1:

Adonis Blue males – shame about the damaged wing on the first one, but it is what it is! 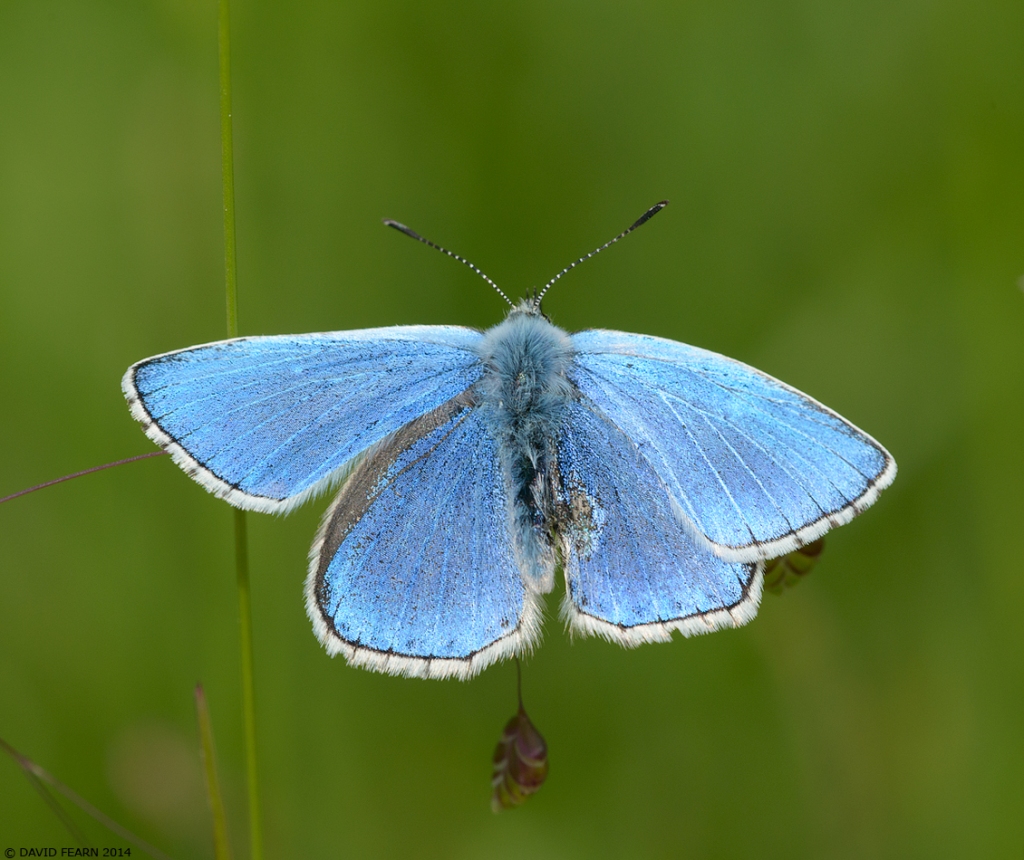